IDF English
Magav
Border Police
About the base

You were assigned to 'Magav'? Want to know where your basic training and courses will take place? Come meet your base! 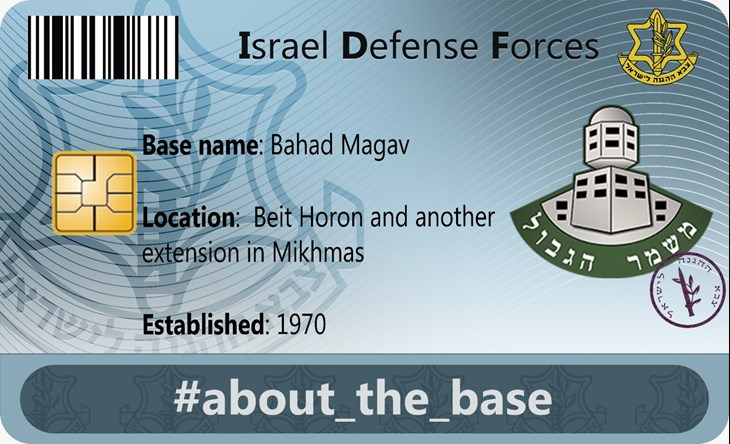 The border police’s instructional base is located near Beit Horon, and the basic training and firing ranges for the force’s unit training is located in Ma’ale Mikhmas.

Bahad Magav ('Beit Horon'): Line 110 or 113 from the central station in Jerusalem or from Modi’in-Center train station.

Basic training base ('Mikhmas'): On Sundays there is a concentrated pick-up with shuttles from the Teddy Stadium or from Modi’in center train station. Therefore, you need to check in advance where the shuttle leaves from. In addition, line 147 - a direct line from the central station in Jerusalem leaves at - 09:33, 12:03, 15:03.

Origin of the Name 'Beit Horon'

'Magav’s instructional base in 'Beit Horon' was established in 1970 by 'Pluga Yud Daled' (company #14), who accepted this area’s assignments, and also 'Magav’s recruit and the driver trainings. During the first decade of establishment, the base became independent sand more of the corp’s courses have been added.

As of today, all of the corp’s courses, either in regular or career service, are held in Bahad Magav and in it’s basic training base.

The courses in the 'Bahad' and in 'Mikhmas' are in a closed-base format. Additional courses that are held in the base are: Squad commander course, 'Yamas' course (Israel Porder Police unit), 'Yasmag' course (Israel Border Reconnaissance unit), offices course, a course of terror combat, urban warfare, police duties, etc.

What Does Bahad Magav Include?

In the instructional base, recruit companies train and other different units come to the base to train.

Most of the corps’ courses are held in the 'Bahad'. Among them are the squad commander course, Yamas course, officer preparation, officer course completion, Yasmag course and more. The courses also emphasize discipline of values, a sense of belonging and unit vanity.

To the new generation joining the corps, I will tell that Magav is a unique corps including combat abilities, police abilities in order to keep our citizens’ safety, and the strength of our society.

For over six decades the border police has been protecting the country and through the years our commanders and soldiers have written impressive chapters of heroism, bravery and endless devotion in the pages of the corps and our country’s history, and created a glorious legacy. This is our generation, your generation, your turn and your custody.

Our corps will meet you with all the society’s shades, male and female combat soldiers side by side, from different ethnicities and religions, but all of them have the same sparkle in their eyes that has been with them from the day of their enlistment and has given them the inspiration to deal with complicated missions and sensitivity to our reality of the security situation.

We, the commanders, see you as an ethical and precious deposit we have in our hands and approach our job with great respect. We wish you luck in the challenging preparation that awaits, and we promise to guide you with the corps’ values and continuous ambition to excellence.